The Thrill of the Haunt (Haunted Guesthouse, #5) 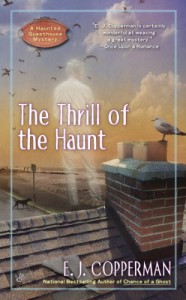 This book took me FOREVER to finish.  I started it while I was on holiday and kept putting it down and sort of forgetting about it - I was in the midst of book binge buying and there were so many new books to admire and... ahem; "Precious" just popped into my head so I'm going to stop now.

Anyhoo... this wasn't a bad book at all.  I enjoyed it, although not without reservations.  Obviously I was distracted when I was trying to read it, but also, the story didn't make it hard to walk away from.

Allison, the MC, runs a guesthouse that's haunted by the previous owner, Maxie and the PI (Paul) she hired right before they were both murdered (see book 1 in the series).  In return for putting on "spook shows" for the inn's guests, Allison agreed to get her PI license and allow Paul to live vicariously through her, helping her solve investigative cases.  Personally I think the idea of "spook shows" is stupid, but I gloss over references to them.

I really like Allison, although she's rather immature - especially when she interacts with Maxie.  She knows it though, and she's got a snarky sense of humour about it, which makes it much more palatable to read.  Maxie and Paul I'm much more ambivalent about; Maxie is just childish and the author never allows her to act mature for more than a sentence or two; it grows old after 5 books.  Paul seems likeable, but we only ever, EVER see one side of him - the side that wants to investigate cases.  Hard to invest in someone you don't know.

The mystery was pretty excellent.  About two-thirds of the way through a major clue is revealed and my first thought was "mystery solved; popular plot-device" but then the author twisted everything up and the ending was really good.  I had it down to two people, but never really knew until the 'reveal' which one did it.

This series is one of those that I'm never chomping at the bit to get to, but I always enjoy once I have.  It's a good series with solid plots, but missing that certain something that makes me eager to pick up the next one.