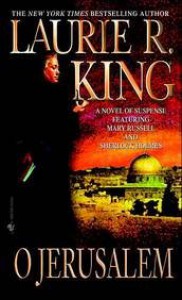 This is a review for the audiobook version, which I listened to in the car to and from work and during which I was on school holidays for 2 weeks.  I say this as a partial explanation for the next line:

Holy cheese whiz, it's finally over!

It felt like this book took an unusually long time to get through.  In part, as I mentioned above, it's my "car read" and I didn't drive for 2 weeks, but also because for the first half of the book, there isn't much happening at all.  A lot of Holmes and Russell walking about in the desert and I mean a lot of walking.  For fully the first half of the book, almost nothing happens.

But oh, what a rich and vividly written first half of almost nothing it is.  I'd come home from work driving through a very cold wet city and feel like I had to shower off the sand and sweat from the deserts of Palestine.  I was never bored, never disinterested and when the second half of the book begins and Holmes and Russell are in Jerusalem, it all starts picking up speed until they are literally racing against a clock.

My only beef about this book is that it's #5 in the series, but takes place during the same time frame as Beekeeper's Apprentice;  if I'd known this, I would have read it second, because it makes much more sense to me.  As it stands at #5, I was left "undoing" several rather significant character developments in my head in order to properly place O Jerusalem and it's characters in the proper timeline.

I'll definitely re-read this book, and in print, because I think I missed a lot of details listening to it the first time around.  But it was absolutely enjoyable and I can't recommend Jenny Sterlin's narration of the series strongly enough.