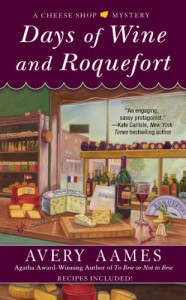 This series started off well enough for me and at first my only real complaint was every time she mentioned a cheese it sounded like marketing copy to such an extreme that I expected a "where to buy" section at the back of the book.  But over time, the cheese marketing has gotten marginally better (although now we have wine marketing too) but my interest in the characters and the mysteries have waned.

I could almost be accused of skimming this book.  I read it, but I barely paid attention.  Still, I was still able to grasp the crux of the murder motivation very early (although not the murderer).

I found the book to be neither good nor bad but I'm giving it 2 stars instead of three because I had to force myself to finish reading it, and because the MC, Charlotte, has added another definition of TSTL to my personal list.  If you've just found someone in your house coming at you with a knife, after you talk him off the ledge and convince him not to kill you and he leaves quietly, perhaps you should lock the freaking door behind him!