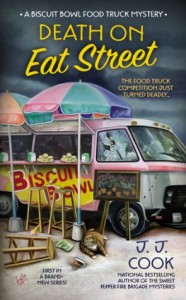 How is it possible to like a book and still find so many things wrong with it?  And am I getting too persnickety with my cozies or is there just a lot of average writing going on?

Death on Eat Street has an interesting setting in the not-very-nice part of Mobile Alabama, with an interesting, newish premise of a food truck and a few likeable characters, including the MC in spite of the fact that she is TSTL throughout most of the book, hitting most of the cliches short of going into the basement at midnight in her nightgown with nothing but a candle during a thunderstorm.  In retrospect, she probably should have.  Still, I liked her, although at times her "I have a dream" thing had me rolling my eyes.

The author is actually a husband/wife team, and I'll admit my enjoyment of their books is hit-or-miss.  My opinion, based on nothing, is that they don't write well together.  I suspect that's why I'm at the end of this book asking myself "Why did I not hate this?"  I'm choosing to believe that part of this team writes in ways I really don't like and the other half writes more to my taste.  I don't know.

Zoe has rich parents that are so over-the-top narcissistic that they hire her uncle to try to kidnap her and take her out to the swamp until she 'gets over' her decision to start her own restaurant.   Yes, this is fiction but who does that?!?

I'm not even going to get started on Chef Art.  He was so implausible from word one it's just not worth the time.  Nothing about him was done well.  Nada.

The current population of Mobile Alabama is just a hair under 195,000 yet ever single time Zoe goes to a restaurant unplanned and spur-of-the-moment she runs into either her parents (who are divorced but always together), her ex-boyfriend, or all three of them.  Uh huh.  Sure.

The plot:  murderer was telegraphed early on.

I liked what the murder was wrapped around, but overall the plot construction felt weak.  Rather than write a suspenseful plot, the authors relied on farcical family dynamics and too many petty crimes and attacks (which nobody bothered reporting to the police) to fabricate a suspense that wasn't there.

And I still didn't hate this book.  Death on Eat Street kept my attention even with I was yelling at it for being stupid.  I am at a loss as to explain it.