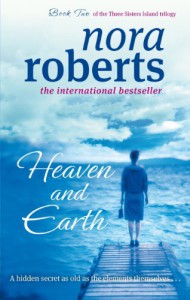 Work was boring again.  Well, at least a good part of it was in the afternoon.  The morning was spent breaking everything I touched, but that's another story.

I knew the first time I saw Nora Roberts book list that there was no way she could have written that many books, that fast and not trip over herself, creatively speaking.  This is only the third trilogy of hers I've read, and admittedly, I've purposefully stuck to the paranormal stuff, but the renew, reuse, recycle mantra is very obvious already.

Before picking up Dance Upon the Air, I was already 2 out of 3 books into the Dark Witch Trilogy.  But it wasn't until I picked up this one, Heaven and Earth that the three R's reared their heads.  Creeping fog, evil in wolf form, red eyes, pentagram, good-marking-evil.  It's all there with no apologies in both trilogies.  Who knows? It might be in her other paranormal works too - I'm just assuming the Three Sisters Trilogy was the first.

Doesn't really  matter, either way.  I enjoyed the read more than enough to finish it.  Even though it's a "romance" the romance isn't what I took away from it;  I enjoyed NR's talented hand at writing relationships.  Tight families, tighter friendships - she does both predictably and well.  She excels at setting;  Three Sister's Island and Cafe Book were both deliciously sketched out and brought to life.  I enjoyed the spooky bent even though I felt like I'd already read it before.

There are worse ways to spend your time while getting paid.  Much, much worse.