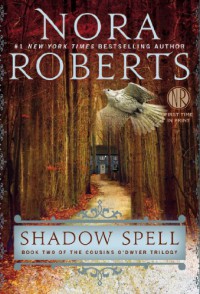 I'd give 4 stars for the witchy part of the story, but the poetic speeches that are part of the romance dimmed the appeal of the book for me.  It was still a worthy read, but realistically only 3 stars for me.

I first ordered Dark Witch because I thought it was going to be a paranormal story and it is, but in my naiveté about the romance genre and it's authors, it didn't really click with me that I had bought a book that was a romance first, and a paranormal read second.  Still, I enjoyed it enough, and I was invested enough in the witchy part of the story, to want to see the big bad conquered and knew I was in for all three books.

Shadow Spell is the story of Meara and Conner.  She's pragmatic and strong and unfortunately a big walking cliche of "i-have-father-issues-and-will-never-let-myself-love-any-man".  Conner is everybody's best mate and brimming with optimism and love.  I'll stop there since this is such a well-worn device it's almost a spoiler in itself.  Still, what little I've read of Nora Robers so far has left me a bit disappointed that she's fallen back on the 'damaged goods' plot device for this book.  Luckily, in keeping with what I have read so far, we aren't made to constantly be drowning in the love; it's nicely balanced out with the parallel plot line involving the three witches.

I am enjoying the paranormal story arc; the battle over the centuries between The Three and Cabhan, the evil, witch?  sorcerer?  Not sure what to call him, but he's deftly written so that the reader does not doubt that he's ruled by lust, greed, hunger for power.  No redeeming qualities at all.  Black vs. White, Dark vs. Light.  I'm pretty sure I've cottoned on to how they'll ultimately defeat him, but until I find out if I'm correct or not, I'm enjoying watching the battles and preludes to war.

Family, the power or friendship and love are constant themes as I suspect they are in all Ms. Roberts books, and while it's a bit heavy handed at times, she makes it work well enough.

The third book will be, I think, the one I'll like best for lots of reasons, but the dynamic between Branna and Fin seems to me the one that offers the least possibilities for gooey romance.  Only one way to find out, and I'll be looking forward to the next, and last, book.