All Fudged Up (Candy-Coated Mystery, #1) 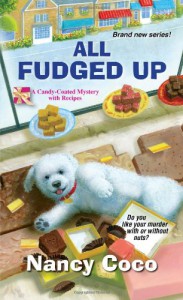 First let me get this off my chest:  Awful title and the cover art was just *this much* too cute.  I found it hard to take this book seriously at face value, even for a cozy.

Given my last experience with fudge-based fiction, I was really reluctant to pick this one up and almost threw it in the give away bag without reading it.  Then several trusted reading friends read it and said it was quite a good first, so I decided to be fair and give it a read.

Not bad, not bad at all.  The read got off to a bit of a rocky start for me, but it quickly smoothed out.  Allie is a bit over-earnest at first, and if I got paid for the number of times she mentioned her Papa by name, I'd have earned back the cost of the book twice over.  Still, these are minor complaints.  The characters quickly establish themselves and the author adeptly sketches out an island full of quirky residents who find their entertainment in unusual ways.  If Allie is a bit of a frazzled-but-determined mess, her best friend soon arrives and brings with her an air of competence and confidence that balances out Allie nicely.  The investigator, Rex Manning, has a great tension going on with Allie and I look forward to future developments.  Trent Jessop sounds smokin' hot but I hope this doesn't turn out to be a love triangle.

The mystery plot was really well done - I loved the historical bent it had.  I can't say more than that without giving away what could be fun discoveries for anyone choosing to read the book.  I did guess the bad guy - but I was only partially correct.  There's a lot going on when all is revealed.  I really liked that Allie didn't make any TSTL decisions, although often found herself in trouble anyway.  And I LOVED that she didn't suddenly think she was better than the police and start running around interrogating people.  When did that become de rigour?  Instead, she stumbles across clues in a believable manner, works with the police instead of behind their backs and the mystery unfolds on it's own without her character forcing confrontations.  Really, it made the reading so much more enjoyable.

As I've mentioned previously, I have no appreciation for fudge, but there are fudge recipes at the end of each chapter; each based on a cocktail.  I skipped over these but fudge lovers willing to make their own might find these to be a delightful bonus.

I'm looking forward to the second book in the series.  If the author sticks to what worked in this one she'll have a great cozy series on her hands.