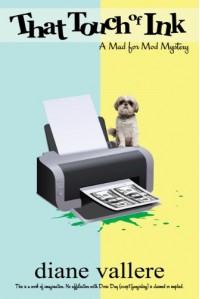 I received this book as an arc via NetGalley in exchange for an honest review.

This is the second book in the Mad for Mod series, and I was quite pleased to see it scheduled for publishing so soon after the first one, Pillow Stalk, and I wanted to read more about Madison Night.  I wanted to see if the character evolved from that almost bitter woman to someone more relaxed and approachable.

Nope, not much.  But then, she has cause in this book.  As foreshadowed at the end of Pillow Stalk, the love of her life, Brad Turlington - also the man who announced to Madison he was married and had no intention of leaving his wife - comes to Dallas looking for Mad.  As we learned in the last book, he wasn't married (never had been) but he was up to his eyeballs in shady dealings and told Mad the one thing he knew would make her walk away.  Or, as the case may be, ski away down a mountain and into a tree, blowing out her knee.  Whatever works.

In Pillow Stalk, which takes place a year and a bit after this confrontation, Mad does even more damage to her knee and That Touch of Ink picks up several months afterward, with Mad recovering from more knee surgery, and glory be! she's using a cane.  Sometimes.  Not often.  I think the author finds this bad knee to be more of a pain than Mad does, as she sort of forgets about it when throwing Mad into adventures.

A $5000 dollar note arrives in the mail as a portent to Brad's re-appearance in Mad's life.  She ignores the message inherent in the receipt of this note; Brad's collecting on a comment she made years ago, that she could be bought for $5000 - because her name is on the note (James Madison being the man in the portrait).  But then the discovery of a fragment of another $5000 note found by a couple of kids makes the news and Madison knows something isn't kosher.  These notes have been out of circulation for decades and there are only a few hundred known to exist.  She drops everything to go have the bill appraised, only to find the numismatist dead on the floor of his home.  But is it really him?  And should she let Brad back into her life? And we're off on a rousing ride to find the truth about who was killed, who is killing and why there are suddenly such a plethora of $5000 notes everywhere Madison looks.  The most important question of all to Madison:  how deeply is Brad involved?

I was hoping Madison would have softened more in this book, but having to face Brad all over again keeps her from really letting go of her rage and truly moving on.  That Touch of Ink has her working her stuff out and I did see evidence of growth in her personality throughout.  I'm also tentatively relieved to see that the author doesn't intend to string out a love triangle (or square) in this series; it appears to be resolving itself in ways both sweet and dramatic.  I like Tex quite a bit; he's showing flashes of unexpected depth and strength, although there are times when I just think he's acting like a horse's ass, "just doing his job" or not.  Those moments, I think, could have been handled with more subtlety.  Hudson doesn't play a large role in this book, but he does have a few scenes and they are written well; you can almost feel the level of comfort he provides to Mad.

All in all, I still have some of the same issues with the MC - I feel like she's reactive while pretending to be proactive.  I also still had issues with the editing, but I'm not going to expound on that here as the copy I had was an arc, and I expect those issues to be resolved before final publication.  (I certainly hope they are, cuz there are some doozies!)  These two factors did cost the story 1/2 star in my final reckoning, however.

But I couldn't put the story down.  It hooked me, in spite of my MC issues, my complete lack of interest in 50's/60's culture (I'm more of a 30's/40's girl myself) and my apathy towards Doris Day's life and career.  I still really wanted to know what happened at the end.  And I really want to see what happens next.