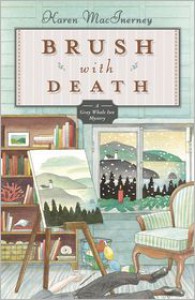 Talk about a fall from grace.

This series, about a woman (Natalie) who gives up her professional career in Texas to purchase and run an inn on Cranberry Island, Maine, started with an Agatha Nominated First book, and has ended, for me, with Brush of Death.

Natalie and the other characters in this series started out mildly interesting, but by this 5th book we've slipped into contentment.  That's not a fault, but for me, the characters have lost any interesting edges, life, or spark they may have had when they were first introduced, so I'm left feeling content with not continuing to read the series, I think.  Even the anxiety that comes along with the various story lines (and there are more than a couple in this book, which did keep things moving along nicely) felt somehow muted, unfocused.

Natalie's dealing with the unexpected death of her niece's mentor and personal friend; she's having unexpected issues with her finances; she's on the receiving end of some rather nasty, disturbing, threats; her niece is freaking out over her first art exhibition, and her future mother-in-law has just arrived for an unexpected visit, bringing with her baggage of both the luggage and existential sort.  The author handles all of these story lines well, weaving them together and keeping them easy to follow.  I'm just not invested in these characters and their future any longer, although I do like the dynamic between Natalie and her fiancé, John.  They work well together as a couple and it's nice to see cooperation between two people in love instead of conflict.

This is not a badly written story, although the editor should be taken to task;  she missed a couple of rather jarring inaccuracies.  Bothersome enough that I actually bookmarked them so I could point them out here.

On pages 18-33 (appox.), Natalie stops off at the general store to drop off some cookies to her best friend Charlene, on her way to her Winter Knitting group.  She leaves Charlene with some cookies and rushes out of the store to make the meeting on time.  On arriving at the meeting we're introduced to Claudette, Emmeline, Maggie, and Selene, other members of the knitting group.  They start gossiping away, sharing backstories, etc.  Suddenly on page 32, Charlene pipes up with a comment.  But she's not there!  Natalie left her at the general store back on page 24!  And on page 33, someone named Lorraine is suddenly talking.  Who the hell is Lorraine?!?!

The only other one I'll mention is small, but it takes place within the same paragraph, and I can't see how it was missed by someone who does this for a living.  To quote:

She hung up the dishtowel and sat down at the table.  "There's always darkness under the surface, it seems.  This seems like such a peaceful place, and yet..." She hesitated, then turned to me, the dishtowel twisted between her hands. "Natalie, I'm sorry about the ring."

She goes on in the next paragraph to continue twisting the dishtowel she'd hung up and walked away from.  It's a small thing, but I 'see' the words as I read them, so this is me:   I'm picturing the woman hanging up the dishtowel, walking to the table, sitting down.  Twisting the dishtowel in her hands.. wait - what?  Aaannd I'm out of the story, trying to figure out why my brain just balked.  This would have been a 3 star read, but that 1/2 star is gone in payment for the brain cramps.

As to the murder plot, I didn't immediately guess the murderer, but I think that was because I was too caught up trying to make sure I didn't end up confused by bad editing again.  The ending felt obvious and inevitable as part of the mystery surrounding the culprit was blatantly obvious from the beginning, even to my distracted self.

I very nearly DNF'd this book - after the mental mess of the knitting group at the beginning, where I had to read those pages 3 freaking times to make sure I wasn't losing it, I thought to myself - do I really want to read this?  I could just put this down and call it done.  But the story did pick up and I guess I'm glad I stuck with it, especially seeing as how book 6 is already on it's way here.