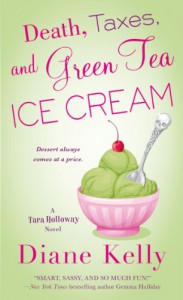 A great series, but this one will go down as my least favorite.  If you haven't read this series and think you might be interested, be warned there's at least one spoiler here from previous books.  I'm not saying anything that not on the back cover, but you've been warned.

Tara is having a Terrible, No Good, Very Bad Day.  Fired at the end of her last book as the result of a bust that didn't go well, she's facing the repercussions in ...Green Tea Ice Cream.  And the author is hitting her with both barrels.  I don't like reading about my MC's being kicked when their down, but I like this series and it was worth the effort.

Tara is smart, confident, independent and a sharpshooter, but this book is her crisis of faith in who she is and how she defines herself.  I'd love Tara as a friend, although I think working with her would be a hazard to my health.  She has two best friends that are equally strong, intelligent and independent and of course, the very hot boyfriend who is also an IRS agent in criminal investigations.

Tara has some scary personal moments in this book and I think the author did a very credible job with her emotions; they felt realistic and sincere and I found myself as nervous for her as she was at least once.  Luckily there's a bit of humour throughout too, so the book doesn't bog down in excessive angst; Tara has no problem laughing at herself, or at least finding humour where she can.

Do you know what's great about this series (or, at least one of the things that's great)?  NO nemesis!!  Ok, well, there is one that pops up once in awhile in the series, but she's not at all over the top and we actually rarely hear from her.  She's a little bit catty, but not stupidly so.

Summarising the plots of these books is neigh to impossible, as there are normally several different plot lines and Tara chases down a multitude of tax evaders.  Add to that her personal troubles that she's dealing with in ...Green Tea Ice Cream and it's a busy book, although the first half is noticeably slower that the last half, where everything comes to a head and gets wrapped up.  Thank you Ms. Kelly for sparing me from a cliffhanger that would only make me irritated; instead, the book ends with just a small mention of one of the plots for the next book, Death, Taxes and Silver Spurs.

I'm looking forward to reading it - especially now that Tara's got her groove back.