Buttoned Up (Button Box Mystery, No. 4) 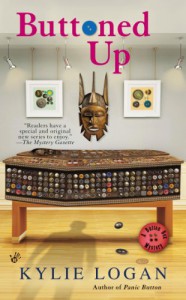 A mystery series centred on a woman who owns a button shop.  At first glance one would not be blamed for thinking this is reaching rather too far as a setting.  But the series works; it's not her best (see her League of Literary Ladies series - that's her best) but it's enjoyable reading.

Buttoned Up was good.  Button shop owner Josie is assisting with an art show opening when the artist ends up dead.

LOVE TRIANGLE SETUP! - Dammit!  At least Kylie Logan included in the setup more than a reason or two to be irritated with Kylie's boyfriend, police detective Nev something-or-other.  Also, the new love interest is English.  Feel free to add to my list of "Shallow reading traits" a weakness for a UK accent (any UK accent: English, Irish, Scottish, Welsh).  But I'm still really, really sick to death of love triangles.  They suck.

Josie acting entitled and sporting an inferiority complex - This book has Josie acting like she's Nev's professional detection partner as well as girlfriend.  She has an expectation to be included in the official detecting and that Nev is going to keep her apprised of anything found in the course of the investigation.  Add to that the inferiority complex she's sporting at the arrival of Nev's ex-girlfriend, suddenly making her act like she's got something to prove, and the whole thing reads wrong.  It crosses that very fine line in cozies between 'realistic suspension of disbelief' and 'oh come on! that would NEVER HAPPEN!'

A solid lack of Kaz, her ex husband, in this book.  Thank god, cuz he's an idiot.

Ms. Logan's creative use of plotting.  I love the Voudon angle and she get's huge props for being brave enough, and imaginative enough to go out there and create a plot that ties Voudon and buttons.  It's fun if you're not expecting it to be anything else.  She also weaves the Voudon beliefs into the story line fairly well.  There was a scene with her neighbour (who watches her shop on occasion) that I recognised as a setup for what was going to happen to Josie, but I'm not sure it's really going to stand out to anyone else.  I also knew who the murderer was, but not why, but I don't think the why can be figured out until the very end; enough information just isn't given to the reader to know.  That's ok, IMO, I think some new information makes the very end more interesting.  And the ending of this book was interesting.

Overall, not a bad read.  Solid 3.5 stars.  I'd have given it the extra 1/2 for the imaginative plot line, but then I'd have taken it away for the love triangle setup.  I look forward to the next book.