Howling for You (Chicagoland Vampires #8.5) 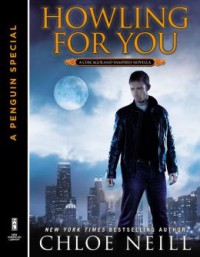 A fictional series is generally about one Main Character (MC), perhaps two.  But fans of series will say that it's the whole cast of characters that make or break a series.  A reader gets invested not only in the MC and his/her love interest, but the MC's circle of friends and their relationships.

Trying to keep complete story lines going for all the characters in a continuing series would quickly result in books that weigh more than the OED and hopelessly convoluted story lines.  This is the reason novellas really shine, in my opinion.  These short story gems allow the author to give a beloved secondary character the spotlight - a chance for the reader to learn more about their background, or an opportunity to indulge in character development without unnecessary baggage in the full length series entry.

Howling for You is just such a short story gem.  I love the Chicagoland Vampire series - it's my absolute tied-for-first favourite UF series (I'm also abnormally fond of Darynda Jones' Grim Reaper series).  It's UF, but with wonderful snark and humour and above all, friendships.  As much as I really love reading about Merit and Ethan, I'm also equally attached to Catcher, Mallory, Jeff, Lindsey, Luc, etc. etc.  Each of the books include varying measures of character development for some of these characters, but the novella is the perfect opportunity to flesh out that development without interfering with the flow of the series.

Howling for You centres on Jeff, a shapeshifter working with Merit's grandfather acting as liaison between the supernaturals and the human law enforcement.  Several books ago, we see him meet Fallon, the Apex were's sister and second in line for Alpha of the North American Central Pack.  Ms. Neill lets us see the sparks fly, but going forward we hear very little about the progression of this romance, only that it's not been easy going.

Now we find out why, and are presented with the micro-mystery of "who stole the coronet" as well.  I won't go any further, as it's obviously easy to give too much a way when a book only has 5 chapters.  But I will say it's very well done; this is a short novella but also a fully developed story line.  Problem, conflict and resolution are all fully formed and fleshed out in an entertaining storyline that moves quickly without being rushed.  The climax of the mystery felt a bit false, mainly because there wasn't really any supporting evidence for it in the story, but I can see how it would have gotten left out in the interests of brevity, and after all, it's not really the central point of the novella.  It's really the only fault in an otherwise well crafted novella.

I'm looking forward to the next novella in the anthology Kicking It, sitting on my TBR pile just begging me to pick it up; Lindsey and Luc's story is one I can't wait to find out more about.