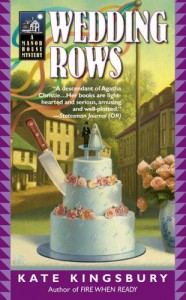 This was probably my least favorite of the series, although I'm hard pressed to clearly name the elements that failed to move me.  I think the story line just didn't interest me enough, so we'll chalk it up to more personal taste than writer failure.

Earl is back and while they are still waiting for his divorce to finalise, at least Lady Elizabeth can stop going around denying that she feels something stronger than friendship, and the reader no longer has to hear her housekeeper harp on (and ON) about "Lizzie getting hurt".  This whole doing-the-proper-thing-and-waiting keeps the romantic tension ratcheted up nicely.

But things are starting to heat up in the war; there's talk around the village about an allied invasion of Europe being planned and Earl is gone more and more often for longer periods of time.  Lady Elizabeth is investigating on her own more often and in this book is actually asked to investigate in order to clear an innocent young woman of a crime she didn't commit (or did she?).

One of the recurring characters in the series is getting married (well, two of them really) and everyone comes together to make the most of the celebration.  Even Earl scrounges a silk parachute from the base for the wedding dress (I remember my mom telling me her wedding dress wasn't as nice as she'd hoped because there wasn't any silk available during the war).  A guest no one seems to recognise shows up and promptly ends up murdered during the reception.

Ms. Kingsbury does another good job with plotting out this murder and it's resolution.  But this one isn't designed to necessarily dole out enough clues for the reader to solve the crime on their own.  Assumptions are made throughout the story, presented as fact, that are meant to point the reader, and Lady E. away from the true culprit.  Some might find this a cheat, but it does provide a denouement that most people won't see until they do.