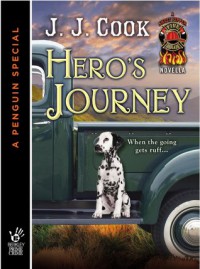 The first book in this series was one I really hesitated to pick up because a female fire chief as the MC just didn't do a thing to grab me.  Remembering I felt the same way about Stephanie Plum (I had to be in the middle of Warsaw with nothing to read before I became desperate enough to give the Plum books a try), I picked it up, determined to give it a chance.  Turns out it was one of the best first-in-a-series I've read.  And I have a huge crush on the ghost.

This little between-the-numbers novella was announced and I had added it to the "to buy" list when the author offered to send it to everyone in my cozy mystery group who requested it, free of charge.  So, yay! free!  It has not affected my ability to review it objectively.

Having said that, there's not much to review, really.  A short story with a small mystery centering around Hero, the station's dalmatian puppy.  His disappearance ties into a bigger mystery; a chain of home invasions and small fires.  The end of the mystery was pretty weak; I wasn't expecting a grand showdown or anything of the sort, but the last line the villain speaks left me thinking "really?  that's the best you've got to offer?"

It's a cute story, but the authors tried too hard to cram a full characterisation of each main character into the novella.  Stella's grandfather and Eric both suffer because of this, coming across as caricatures of themselves.  Not that there's a whole lot to like about Stella's grandfather most of the time, but he isn't even realistic here.

Overall, the novella felt rushed together, but I still enjoyed reading it and it served as a nice review of who will be showing up in the second book, out next month.  I can't wait!