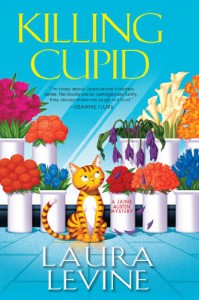 I'd read the first few books in this series years ago, when they were first published, but the series fell off my radar.  A lot of my cozy book friends have been talking about how much they love Jaine Austen and her cat, Prozac and I've been meaning to pick up another of the books and get reacquainted.

Jaine is a freelance copy writer and is hired on to write profiles for an on-line dating service.  The owner Joy, is less than scrupulous and ends up dead at a dating mixer.  Jaine is considered one of the suspects so she goes about asking questions and trying to clear her name.  Hilarious adventures follow.

While this is a very well-written book, with a solid mystery plot and laugh out loud humour, it didn't actually do it for me.  When I read books I like to lose myself in the story, become attached to the characters; I like to feel like I'm a fly on the wall in this little world the author has created.  Killing Cupid was absolutely entertaining, but it just wasn't my type of story.

Jaine is likeable, witty, and loaded with self-depracating humour.  Her voice is the inner voice of smart-alecks everywhere.  After 12 books she's still sworn off relationships, and none of the books I've read in the series include any romance for Jaine.  Lance is her so-self-absorbed-it's-almost-endearing neighbour.   He's constantly looking for love and always ready to jump into the next relationship.

But the star of the show is Prozac, Jaine's cat.  He's got all the best lines in this book.  The author plays up his Machiavellian antics and commentary (not real commentary, just what Jaine imagines him saying) for maximum laughs and succeeds.

Finally, while you never meet them, and they don't play any part in the mystery itself, Jaine's parents are main characters throughout the book, via he-said/she-said emails from their retirement community.  Pure slapstick comedy, and probably the parts of the book I found the funniest.

The murder plot was nicely done.  The murderer was never obvious and the suspects each had legitimate motives.  Jaine only had one really TSTL moment that comes to mind, so not too bad for an amateur sleuth.  I didn't figure out the murderer until Jaine did, and enjoyed being surprised by the end.

I'm a big believer in reading a series in order, from the beginning, but I was able to pick up this 12th book after years away from the series and jump right in, so I think it works just fine as a stand-alone for those that just want to give the series a try.

I'd recommend this book and series to any reader who is looking for very light-hearted, often slapstick humour with a well-plotted mystery.  If you're looking to become invested in a series, this probably isn't the one to try, but if you're looking to be entertained by likeable characters, you're in for some laughs.

(I received this as an ARC from NetGalley in exchange for an honest review.)