Death and the Girl He Loves (Darklight Trilogy #3) 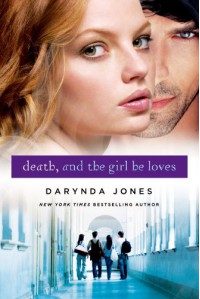 WARNING:  If you haven't read the first two books in this trilogy - there are spoilers ahead.  But no spoilers for this book.

I don't read a lot of YA - usually only if someone I trust highly recommends it and if it's paranormal.  But I picked up the first book in this trilogy based solely on the author, Darynda Jones.  I love her work.  I LOVE her snark.  She writes some of the best snarky banter around (Chloe Neill - also a favourite).

This trilogy didn't disappoint.  If the fact that I choose paranormal didn't give it away, I'm not looking for the realistic portrayal of teens.  All that angst and melodrama - Yuck!  These are teens I can thoroughly enjoy reading - smart asses every one of 'em!  But all thicker than thieves.

I didn't know until I finished this one and went searching for information that this was, in fact, a trilogy.  But the book ended in such as way that it could be the final wrap up or it could continue.  It was only when I turned to Google in confusion that I saw references on her site to it being a trilogy.  Boo and hiss.

I read through this final instalment in a day - I stayed up too late on a work night because no way was I going to put this book down.  It starts of a tiny bit slow - Lorelei is attending a boarding school in Maine, hoping to hide out from the chaos and forestall the inevitable until she can figure out what she's capable of.  It picks up pretty fast though - she can run but apparently she can't hide.  I was happy to find that the gang is only separated for a short time, and once they were reunited I became completely absorbed in the book.

It's a fast, fun read with a final showdown that isn't kind to anyone, but ultimately fulfils the prophecies.  The aftermath took me a bit to figure out - the transition was very abrupt and so left me feeling disoriented (which might be just what the author intended...) for a few paragraphs before I had my Ahhhh.... moment.  After that - fun.