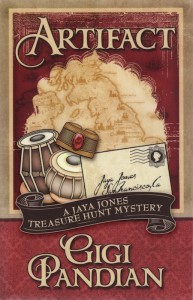 I was reading a post by Rainy Day Reader that talks about "Reader's Block" and I had a eureka moment - there's a name for what I've been struggling through!  I have been picking up and putting right back down, one book after another the last couple of weeks, to my extreme frustration.  Perhaps now that it's been named, I can move on from it.

I am going to cry 'reader's block' to explain why it took me 10 days to get through what was ultimately a very entertaining read.  Before I actually start talking about the book, a little aside here to say that it's published by a small, independent press called Henry Press.  This is the fourth mystery (third author) I've read by them and I have to say I have been impressed with each and every one.  Professional editing and proofreading, not to mention the quality of their writers thus far.

Moving on to the actual book.  Artifact is a "treasure hunt mystery".  I love treasure hunts!  And this one starts with the "mysterious package" that arrives in her post.  I won't give much more away, but it's a lovely adventure in the spirit of some of the better writers of a past age.  It's fun, but it's not shallow (although the heel wearing thing is odd), it's well-researched, but not dry.  It's light without being funny/silly.  Mysterious men are involved; men with secrets and interesting Revelations.

I'll admit to being a bit worried in the beginning - it starts off a bit slow (or, it did for me; could have been the reader's block) and I didn't quite know what to make of her best friend Sanjay.  I had read a short story about these characters a few months ago that hinted of a possible love interest between them.  I gotta say, I didn't feel their chemistry at all, so I was pleased to see that's not where the author took this story at all.  Sanjay only makes a very brief appearance at the start of the story.

The characters on the main stage are all interesting and well written, as is the setting (primarily Scotland).  I could hear the accents, see the pub, and feel the weather as I read.  I loved Angus and Fergus, the two old bar flies at the pub.  They're delightful characters and they play their part in the unfolding events perfectly.

The plot was slow to build and I think the author did an excellent job stringing me along, not giving away too many clues about the murderer.  The killer was revealed to me the same time Jaya found out.  There were a few holes here and there:

Angus' man-of-action role isn't fully explained, he sort of just appears out of nowhere, sorta like Mighty Mouse.  Neither is Derwin's knowledge that Rupert is still alive - if Rupert never made it into the pub, how does Derwin know to hunt him down in the storm?  Professor Wells participation back in the states felt a bit like an afterthought as well.

Overall though, this was a really fun, not-too-outrageous, adventure, tucked into the pages of a book.  I'll be looking forward to Ms. Pandian's next book.  I'd damn well better be over the reader's block long before though...