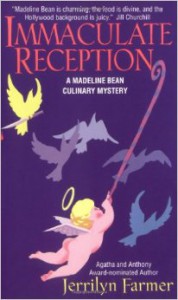 I read this book when it first came out over 20 years ago, and I loved it.  I've re-read it since a couple of times, but never after I started writing my thoughts down, so I picked it up again this week and I have to say it ages perfectly.  Farmer was a talented writer who wrote great mysteries and very real characters you'd be happy to call friends.

Immaculate Reception is the re-imagining of the very real happenings of the Catholic church in the 1930's, specifically a document called Humani generis unitas (On the Unity of the Human Race).  This document was a draft for an encyclical planned by Pope Pius XI before his death on February 10, 1939. It condemned antisemitism, racism and the persecution of Jews. Because it was never issued, it is sometimes referred to as "The Hidden Encyclical" or "The Lost Encyclical."  Farmer also ties some Nazi stolen treasure stories into the mix for a breathtaking ending.  This might all sound over the top and Indiana Jones, but it's definitely not.  But it's a great story that can leave invested readers questioning the line between heroism and villainism.   It's also - in between all that - a fun, lighthearted book.