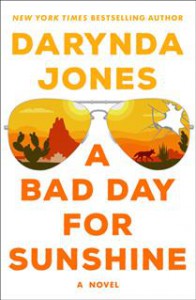 A long time fan of Jones' writing, I was excited to hear about this new series after her Charlie Davidson series came to an end, but also hesitant, as the premise for this new series sounded like quite a departure in a lot of ways.

I needn't have worried; A Bad Day for Sunshine has everything I loved in the Charlie Davidson series (save the outright paranormal plots), only slightly more polished.  Where the snark and jokes in the CD series could sometimes be a tad overdone (naming ever in animate object), here it was perfectly balanced.  The multiple plots were here too, without quite the manic pace, and the friendships and dialog were bang on perfect.  Levi too is the version of Reyes one could take home to their more liberal parents.  In many ways, as much as I loved the Charlie Davidson series, Sunshine Vicram feels more polished.

Plotwise, there are many different irons in the fire and all were good, though a few were telegraphed ahead of time to varying degrees.  I knocked half a star off because the multi-book plot feels transparent.  I still can't say who did it, but I feel confident about who didn't and what role the character played in the crime.  Whether I'm right or not, it left me feeling frustrated with the lack of resolution at the end, and doubly so when I found out the next book doesn't come out until July 2021.  But A Good Day for Chardonnay will definitely be pre-ordered.