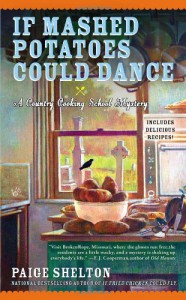 I was a little hesitant to start this book, something about the axe-wielding ghost just didn't immediately appeal to me, but once I picked it up I was hard pressed to put it back down again. A lot of fun! A great murder mystery I had no idea of the ending to, as well as a great ghost mystery as well (although I had the result of that investigation pegged early on). I really liked Sally-the-ghost. All the characters are likeable and I got a big kick out of seeing a cameo appearance by Sam Brion, the Sheriff from Ms. Shelton's other mystery series. I'm hoping for more sparks between Betts and Cliff in future books though... I like them together but they are, at the moment, a bit lukewarm.