Mayhem at the Orient Express (League of Literary Ladies #1) 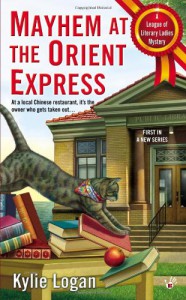 I ::Loved:: this book! I never say that about firsts-in-series; most of them are a bit clunky and awkward, as the author is getting to know their characters on paper for the first time.

This book was just excellent and I felt like it took off from the first page. I love the setting - an island 12 miles into Lake Michigan. That just invites quirky characters and eccentricities. And the location allows for weather of all kinds - like a spring blizzard in this book, allowing the setup to work perfectly.

The POV is first person, but it's set up in a way that's a tiny bit like Bea is talking directly to you - not irritatingly so - just enough that her personality really comes through, and I love her personality. She's smart, accomplished, wealthy AND she has a past. But instead of dumping it all out on you right at the beginning, there are just small comments; reactions to things that hint at bigger things and again, not in an irritating fashion; the action is fast paced and interesting so you aren't feeling like you're being teased (too much) or led around by a hook. I'm pretty sure I know what her former career was, and she comes right out and eventually shares what brought her to the island and a new life, but there's still so much to learn!

The other characters are all introduced almost at once, but each is so unique I didn't have any trouble keeping them straight. I like Kate's character; Chandra is just a wee bit too much of a caricature at points, but she shows a streak of mischief I really like! And oh my heaven, Levi. Ms. Logan's other series (which I genuinely like a LOT) has a sweet romance sub-plot that you find yourself cheering for. But this series and Levi - HOT! Love the banter between him and Bea; the author does an excellent job making the tension between those two vivid. And he just screams "man with a past!" to me - I hope I'm not wrong. Kate has a possible love interest as well who intrigues me - I want to know more about him as well - and Chandra is too busy revisiting her past to care much about future love interests.

Finally, the plot - well done Ms. Logan, well done. I never had a clue who the villain was - lots of suspects, disparate clues - and when it was revealed, well, I read a lot of cozies, and I'm not saying it's never been done before, but this is the first time I've seen it. I can't wait to read more about these three. Ms. Logan has set the bar high for herself with this one; I hope it's a sign of things to come. I found this book to be a breath of fresh air in a genre that's been threatening to stale for some time now. I'll be eagerly awaiting word of book two!