Do Or Diner: A Comfort Food Mystery #1 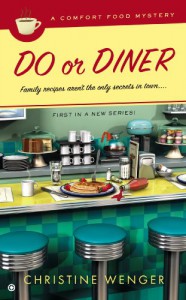 Excellent setting: small town, up-state New York on the lake. Trixie buys not only a diner, but a house, 12 cottages, and a bait shop from her aunt. Talk about lots of options for murder and mayhem going forward. The author has created a setting that won't get stale as she'll be able to rotate her plots around different areas of Trixie's business, as well as around the town itself.

The characters seem well developed. I don't think you can dislike Ty; the author knows how to write 'charming' into a male lead. Some might find him too charming and therefore irritating.  Trixie is a good solid lead too; she has a painful past but she's not mired in it, nor is she drowning in her own melancholy and dragging her readers with her. Trixie is focussed on looking ahead and it makes me want to read more. I really like Jaunita - something about her character makes me laugh.

The plot was...expected but unexpected for me. I'll leave it at that so as not to go spoilerish. But it was a solid first effort.

What needed work? The writing in some areas. There's an entire scene/conversation between Trixie and a character named Antoinette Chloe Brown at ACB's house that was just so unbelievable as to spiral into the ridiculous. It was choppy and would never happen. Unbelievable even in the cozy world. It stuck out in my mind for the rest of the book, colouring my overall opinion. Also sticking out - her truly insane belief that Ty, the detective on the case, should allow her to investigate with him, as his partner. Really? Her ex-husband is a deputy sheriff! In what universe is any ex-wife of a cop that naive as to think the lead investigator in a murder is going to let her help investigate?!

My opinion? It lowered the overall quality of the book, which has strengths.

These lowpoints weren't enough to stop me from reading the next book in the series. Most firsts are awkward. Fingers crossed the second one will find a better groove.