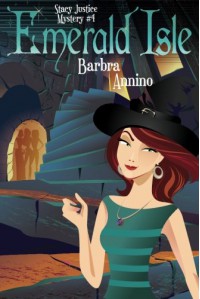 An entertaining read, the fourth in a series that started out as mysteries, but have since ventured more firmly into paranormal/fantasy. But it just misses 4 stars because I felt no remiss at putting the book down frequently and allowing myself to be distracted easily. A true four star read is one I'll eschew household chores for. (5 stars will have me missing meals.)

The characters are all charming and likeable. I love Lolly - who only functions when drunk. Birdie can be a bit tiresome and in this book tends to veer into attempted-heart-tugging soliloquies every so often throughout the book, but not so much as to be a drag on the story in any way. Stacy is a likeable every day heroine you can imaging drinking with and the people she surrounds herself with are the same. Luckily the town hussy merits only a scene and a mention in this book - the whole 'nemesis' thing being played so often now it's trite. Instead we're introduced to Birdie's nemesis - but again, the author keeps it from being too annoying by making it a relationship/conflict that's a one-book-deal. We're not, it seems, going to be forced to watch Tully's idiocy in future books.

Plot-wise, a few holes. Ethan seems to be an also-ran; I'd have liked more explanation as to his motivations and background. The climax of the story, and the show-down, seemed to have happened awfully quickly and wrapped up sort of fast at the end of the book - I was surprised at how fast it all came together. Most times this is an ok thing - authors who drag their characters and readers to hill and gone and back again risk tiring the reader out before the end. But this ending did sort of feel rushed.

The entire resolution with Stacy's mom *was* rushed - a page or two at the end was all Stacy's mom got when all was said and done. Stacy has lamented the absence of her mother for 4 books!  They're finally reunited and the reunion is all of a page or two?  I'd have like to have known a little bit more. I did very much enjoy being surprised at the end by the unveiling of the villain and that showdown was terrifically written.

All in all a solid, entertaining series and an enjoyable read. I'll definitely keep my eye out for the next one.