No One Is Too Small To Make a Difference 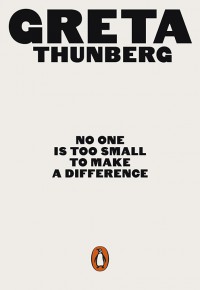 Greta Thunberg is the bomb.

I first heard about Greta when she began school striking last year, but only, at first, as a curiosity (on the part of the press).  It wasn't until her speech before the UK parliament that she got enough press that I was able to understand her story. When I read the speech in the Guardian, I was laughing - in the best way - at the sheer audacity, bravery, and brilliance, of a 16 year old standing before the august (HA!) body of British lawmakers and telling them that:

The UK is, however, very special.  Not only for its mind-blowing historical carbon debt, but also for its current, very creative, carbon accounting.

This ongoing irresponsible behaviour will no doubt be remembered in history as one of the greatest failures of mankind.

Did you just hear what I said? Is my English okay? Is the microphone on? Because I'm beginning to wonder.

I handed the speech to MT and said You HAVE TO read this. It's written by a 16 year old Swedish girl whose first language isn't even English! (We who have lived our lives isolated on single language land masses - and yes, yes, Spanish, but it wasn't widespread when I was a kid - are always in awe of those of you who juggle multiple languages with ease, never mind speak it better than us natives.)  I've been a following her in the news ever since and I just admire the hell out of her.  I found this little collection of all her speeches up to and including her UK Parliament speech, on the bookstore counter, and snapped it up.

It's nothing fancy; just a small booklet containing all 11 of her speeches through 23 April 2019, and if read cover to cover (which I don't recommend), it's repetitive.  But the message is powerful, and like it or not, it's dead-on accurate: our house is on fire; what we would never do to our own lawn, we're doing with impunity to the rest of the planet, and we're collectively living like a magic, 23rd-hour solution that will make everything ok again is going to miraculously fly out our asses.

Greta is making waves because she's 16 and she's the only one willing to stand in front of entire governments and actually say, with only a tiny bit more tact: you're all idiots and you're the generation that will always be known as those idiots who destroyed civilisation as we know it.

On a more first-world-problem note: this wonderful 16 year old was nominated for a Nobel Peace Prize and even though she didn't win (and should have), I am still thankful I'm not a teen today.  Life is hard enough as an adolescent, but now teens are nominated for Nobels; getting into Yale or Oxford suddenly isn't the acme of teen achievement any more.  Yikes.