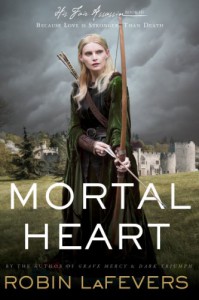 I was so interested in this book, I actually started it before I'd finished the second book.

Unfortunately, though it was a good read overall, it didn't quite meet my expectations.  Though the first two books contained an element of romance, this one was almost exclusively a romance from almost the beginning, and the big plot twist concerning the abbess was telegraphed rather early on, so that didn't work all that well for me.

But I did enjoy the interactions between Annith and Balthazar, and oddly, the part of the story that centered on the Hellequins was the part I found the most interesting.  I could have happily spent a few more chapters running around the woods with them on the hunt.

I read this as part of Halloween Bingo, and though the story is centered on Anne of Brittany and her struggles against the French, at least half the book takes place in the woods and forests of Brittany, where Annith meets up with Balthazar and the hunt, fights more than a few battles, and seeks refuge amongst the trees several times throughout the book.  So, I'm using this for In the Dark, Dark Woods square.