That Doesn’t Mean What You Think It Means: The 150 Most Commonly Misused Words And Their Tangled Histories 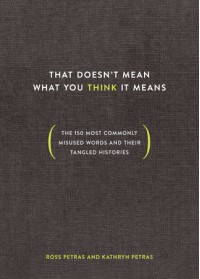 My 'discovery' of this book is a perfect example for the argument of using a continuity of style on book covers.  A year or two ago, I bought and read You're Saying it Wrong, book about commonly mispronounced words, and loved it (I've been saying Turmeric and Van Gogh wrong all. my. life.)  I recognised the similar cover on this, the authors' newest, and immediately snatched it up.

I should really rate this 4.5 stars, because in retrospect, I can recall several typographical and at least 1 grammatical error in the text, which seems especially egregious in a book about grammar.  But I suppose perfection is an unreasonable expectation even for a grammar book.  Actually, I don't believe that, but I am too lazy to adjust my rating.

Other than that, it's an excellent reference for word pairs that are often confused with each other, including the obvious affect/effect as well as some I'd never thought about before but were obvious when I saw them, like trooper/trouper, flair/flare and flout/flaunt. Also included are words/terms that are just used wrong, like epicentre and ambivalent.

Scattered throughout the list are a few spreads that cover when to use who/whom, the correct usage of lay/lie (I found their explanation for this the most useful I've ever read), and a general guide for latin and greek plurality: when to use 'i', 'a', 'ae', and 's'.  This one sort of cleared up a running debate MT and I have had concerning the plural of 'platypus' - while we both favoured 'platypi' on aesthetic grounds (it sounds better than 'platypuses', which is what the local sanctuary has settled on), it would seem logical to follow the same rule used for 'octopus', which is 'octopodes'.  I find this a happy compromise (MT is stubbornly sticking to the incorrect but more melodious platypi).

Each entry includes an example of the incorrect usage, the etymological history of the word/words, and most of the time, examples of correct usage for each word as well as basic definitions of each (nb: the author's state upfront that this is based on the North American dialect of English).  It's well written, not dry, and informative.  It will be a handy reference in the future when I'm unsure which word to use.