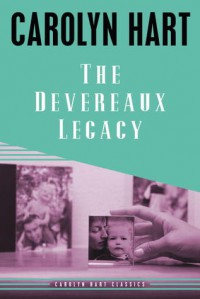 An early stand-alone mystery from Carolyn Hart, that was originally bought by Harlequin and marketed as a gothic romance.  This is one of those stories that is best discovered by someone who hasn't already read a fair variety of romantic suspense.  With nothing to compare it to, one might find this a very lively and escapist story.

Leah arrives in South Carolina after the death of her paternal grandmother and Leah's subsequent discovery that she herself has been presumed dead since she was 2.  Wanting to find out why, and the truth about what happened to her parents, she arrives at the Devereaux Plantation full of questions, discovering she still has a maternal grandmother who is thrilled she's alive, and 3 cousins that might not be so thrilled.

This slim volume reads exactly like a Barbara Michaels in many respects.  Hart says in the introduction to this re-issue that she suddenly found herself in a market that had no interest in women writing murder mysteries, and after 9 years of rejection, found that she could sell her books if she made them romances.  This bow to contemporary demands is apparent in the romance: it's insta-love at it's most glaring, and more than a little bit naive and awkward.

Sandwiched in between in the awkward romance is, unfortunately, only a slightly less awkward mystery, but knowing what I know about Hart's real mysteries, I have no problem believing it's because she had to cram it in along the edges.  It's a good mystery; just not one that was allowed the space to unfold naturally.

It's definitely nowhere close to Hart's normal standards of writing, but hints of what will come in her future Death on Demand series are evident: haunting atmosphere and fully fleshed out characters that are capable of passionate acts of love and cruelty.