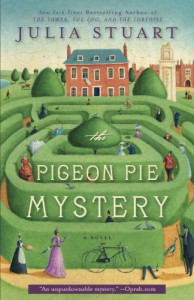 I bought this book purely on a whim while on holiday, based on the cover and the title, while trapped in a small used book store.  I say 'trapped' because a terrific thunderstorm was raging outside, keeping me and the owner in the shop until well after her normal closing hours.  Had I not needed to linger until the threat of leaving this earth as a human lightning rod had passed, I'd have probably not bought this book (I'd passed it over on my initial perusals).

Points to the thunderstorm; this was a charmingly eccentric Victorian age mystery with an Indian princess MC, who is forced to accept a Grace and Favour abode in Hampton Court Palace, after her deposed-Maharaja father passes away in less than illustrious circumstances.  Soon after settling in, her lady's maid falls under suspicion of murder, after another Grace and Favor resident drops dead after eating her pigeon pie.

What follows is a colourful, wryly humorous, if a little over-long, mystery.  The characters are all odd, eccentric and chock full of secrets; some of them rather shocking.  There's a lot of situational humor, and levity based on misunderstandings.  Not a single character is dull, but the story never quite goes over the top.  My only complaint is that, even though I enjoyed the whole story, it was longer than it needed to be.  The fluff was clever and interesting, but it was still fluff.  The ending though, was clever as hell and delightfully unexpected.

I read this for Halloween Book Bingo's Country House Mystery.  I was worried at the outset whether it would qualify, but the entire mystery and investigation takes place within palace grounds and involves only the residents and the servants.