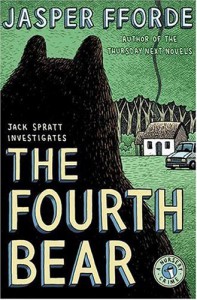 What can ever be said about a Jasper Fforde book that would make sense to anyone that hasn't read one?  This is the second in what is, so far, a two book series about what crime would look like if Nursery Characters lived in the real world.  Jack Spratt, the head of the Nursery Crimes Division, investigates several seemingly unrelated crimes:  Porridge smuggling, a missing Goldilocks, the escape of the Gingerbread man, and his new car that never ages, with a painting in the boot that does.  All while fighting suspension based on a pending psych evaluation after being swallowed by the Big Bad Wolf.

It's not all Mother Goose either, side characters include Spratt's daughter Pandora and her soon to be husband, Prometheus and at least one character from Shakespeare.  Oh, and an alien.  Because, why not?

In spite of sounding (and mostly being) silly, it's not an easy/breezy book to read.  There are layers in the writing and the jokes and the references that are easy to miss.  There's a subtle - very subtle - disregard for the fourth wall, where the characters not only recognise they're in a book (a la Thursday Next), but will make subtle reference to the author and the reader.  So not only is it a book where the overload of satire is best enjoyed in small doses, but one that if carefully read will give more humorous dividends than a quick read would.

Generally it's just a hell of a lot of fun to read.  The puns get punnier towards the end and there was at least one *snort*chuckle in the last 30%.  It might have been it was late and I was tired, but

I read this for the Modern Noir square in Halloween Bingo.  It's a gimme for the Grimm Tale square, but I've already read that terrible retelling of Snow White and it's not going to have been for nothing, and Spratt's attitude and methods are definitely noir-ish.