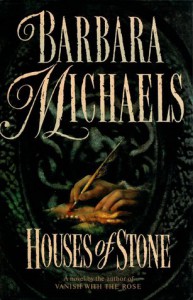 I'm not sure what to make of this book.  It's a much longer, slower-paced book than most of Barbara Michaels' body of work.  It's also a lot meatier and it reads very much like Michaels had a couple of agendas when she wrote it, among them feminism, history and archeology, and the origins of the gothic novel.  Anyone familiar with Barbara Michaels knows she was qualified on all fronts.

Unfortunately, though she did redeem herself about 75% of the way through, I never really warmed to the MC, Karen.  In fact it took me that long to remember her name, though I could have rattled off a list of all the secondary players without a problem.  For most of the book she's so ardently 'feminist' that she is paranoid and distrustful of literally every word that comes out of anyone's mouth.  Her best friend Peggy spends much of the first half of the book apologising to her for perceived slights.  I put the word feminism in quotes before because Karen equates being a feminist with having that mistrustful chip on her shoulder, when in reality that chip has more to do with her own perception of herself and how she is always 'handled' by others.  It's no coincidence that the point at which she started letting go of all her resentment was the same one at which I started to like her.

Houses of Stone is a story of a story within a story within a story, and though there are suspicious and mysterious events that happen from start to finish, it never really had that typical build up of tension inherent to mysteries or suspense.  There was a climax of sorts, but honestly it sort of felt tacked on so the paranormal aspect of the book could be wrapped up.  The heart of this book is about the research involved when an important, previously unknown text is discovered.  With a tad of romance, intrigue and deception.

For me, Peggy made this book.  I loved her competent, no-nonsense attitude and Ioved how comfortable in herself she was, and therefore how unstoppable a force.  She kept me reading long after I'd have gotten fed up with Karen; a fortunate thing, since I'd have missed a good story otherwise.

I read this as a buddy read with Linda Hilton and Moonlight Reader and also for the Gothic Square for Halloween Bingo. a square in Halloween Bingo - but which square I'm not sure as yet.  I'm hoping to hear Moonlight Reader's thoughts because I'm not sure I'd call this romantic suspense; I had thought maybe gothic but I'm not really sure of that now either.  Worst case, Barbara Michaels is my wild card author, so the book, besides being enjoyable will serve a purpose for bingo no matter what.