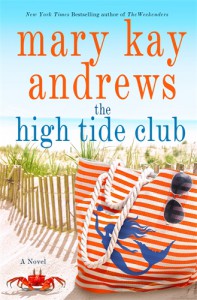 That's what this book appears to be.  Something Andrews - an author whose books I've always enjoyed - phone in.  Huge continuity errors, like an off-stage character that dies in WWII, first over Iwo Jima, then over Germany.  A fragmented sentence ended with a period that is truly a fragment - just cut off half way through; I can't even guess what it was supposed to have conveyed.  Monster gaps in the timeline, and I don't just mean time passes, but time passes where plot-important stuff happens and it's just ... gone.  Like maybe it used to be there and someone went all highlight-and-delete happy without turning Track Changes on.  The first half of the book is like a time warp, without the narrative overlay.

There's supposedly a romance in here too, one that gets exactly two scenes.  Normally this would be fine; this story isn't about the MC's romantic life.  Except the story starts with Brooke being a single mom because she didn't tell the boy's father she got pregnant the night before he left for a 3 year research trip to Alaska, then continued not telling him.  During the course of this story he comes back, hoping to start back up, having no idea he's a father.  Even after he meets the boy.  All of this ... baggage; seems like it would call for more than 2 scenes.

The most unfortunate part of this is that The High Tide Club is, at its core, a really great story about extraordinarily strong women, friendships that span a century, and a ripping good murder mystery.  It's genuinely lovely; with a lot of heart and, at the same time, a delightfully brilliant mystery.   The American South setting is something Andrews excels at, even, apparently, when she's phoning it in, and the characters are all fully realised.

If St. Martin's and Andrews hadn't been so short-sighted as to publish the raw manuscript, instead of a finished, edited work, this might have been one of her best.   As it is, I think I'll just re-read Hissy Fit.