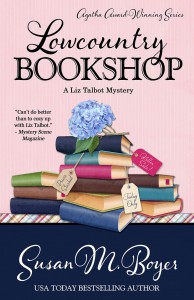 There aren't many series left I look forward to, but this one is always satisfying.  Lowcountry Bookshop wasn't the strongest of the bunch, but still an enjoyable way to escape.

Liz and Nate are hired by an anonymous client, through their attorney, to prove a local mail carrier (Poppy) innocent of a hit and run perpetrated during a massive rainstorm.  This construct felt, for much of the book, forced, as though Boyer couldn't make it work any other way, but by the end, the anonymity makes complete sense and adds an additional layer of complexity to the plot.  By the end, it's only the revealed guilty party that doesn't really mesh with the story; as a lover of mysteries I have come to expect all aspects of the mystery to share context, but as Boyer writes it, it's likely a lot more realistic.  There's a plot twist but too many aspects of it are telegraphed early to be shocking.

Where the book shines is with any scene involving Liz's family.  Hand to god, I wish the Talbots were both real and part of my life.  I rarely laugh so hard as I do when I'm reading about what Liz's daddy is currently up to.

The only really true let down in the book was sloppy editing; in the past Henery Press could be counted on for solid editing and proofing but lately standards have slipped.  Hopefully it's just a temporary indication of a growing business, and I still look forward to the the next Liz Talbot book.