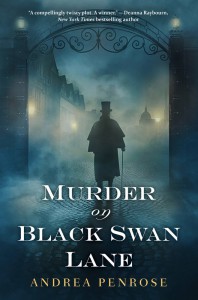 This is one of those books that I liked in spite of demonstrable problems; a good example of when characters can overcome the flaws in a plot.

Lord Wrexford is an accomplished chemist and has the means to devote his time to it in the privacy of his own home.  He has a rather black reputation, although it's never specified why; only off hand references that include womanising, a disrespect of protocol, and a dismissive attitude about social conventions.  He has a valet named Tyler that acts as his lab assistant and all-around Bunter, only with a sharper tongue.  I like Tyler.

Mrs. Sloane is the widow of the famous satirist A.J. Quill.  An even better artist than her late husband, she secretly picks up his pen after his death to stave off certain penury; she also allows two homeless waifs known only as Raven and Hawk to shelter in her downstairs, feeding them when she can, and attempting to educate them and give them a bit of polish.  Mrs. Sloane is up to her eye-balls in secrets, her new profession seeming to be the least of them.  She reads and speaks Latin, and has a copy of DeBrett's in her desk drawer.  Half this book's weight is comprised of hints about Mrs. Sloane.

Wrexford has been verbally and publicly sparring with an influential member of the church.  When the man is found dead with chemical burns on his face and his throat slit, Wrexford is the obvious suspect and is set upon by a Bow Street Runner.  And all the while Quill has been faithfully satirising the events, with details that are frighteningly accurate.  Wrexford sets out to find out who the mysterious Quill is, and when he does, strikes a bargain with her:  His continued silence in exchange for access to her information network in order to prove his innocence.

So far, so good.  Even though this isn't a new premise, I can't help but get sucked in.  Unfortunately Penrose's plot doesn't really work.  It's two different plots that she attempted to merge into one with a single weak scene.  What could have been a very tight and gripping plot ended up being undermined by the forced connection, and left clunky and underwhelming.  This, combined with much too heavy-handed hints about Mrs. Sloane's 'mysterious' past resulted in a book that was good, but not great, and only mildly entertaining when it could have come closer to edge-of-your-seat stuff.  Penrose also qualifies for the dubious award for most overused idiom.  I love the phrase "pot calling the kettle black", but using it a dozen times in the same book is an excessive display of exuberance.

Still, Penrose has put together a great cast of characters and I'm interested in finding out what happens to them next.  I'm hoping, too, that subsequent books (there's at least 1 more out now, and 1 planned, I think) will see her finding her groove and writing stronger stories.