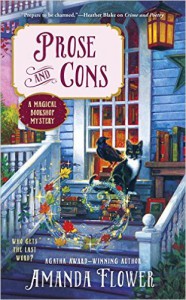 I wavered between 3.5 and 4 stars for this one, but ultimately, I enjoyed reading it, so 4 stars it is.

Amanda Flower is a pseudonym for an author that wrote an Amish series under another name, Isabella Alan, which I started off really liking and ended up being totally fed up with after 4 books. The best part of the series was the protagonists attraction to an Amish man who was, of course, impossible to have.  Beyond that, the plotting and characters just ended up being irritating.

But so far, there's none of that nonsense here; I like the characters, especially the front-running love interest, the sheriff, David Rainwater.  I like the story setup too, with the tree growing through the middle of the bookshop, the crow, the cat and the mystical properties of the nearby spring that brings the bookshop to life.  I love that the bookshop throws books at people.  Seriously, that might be my favourite part of the whole series.

What I do NOT like is the similarity in spinelessness between Violet in this series, and whoever the protagonist was in the Amish series.  I don't admire waffling women (or men), and Violet more than just waffles - or should I say she does less than waffles? - she just doesn't do anything in terms of steering her own life.  The author has setup a love triangle of sorts (why? because we hate them!) and Violet doesn't even want one of the men - a childhood sweetheart - but rather than just tell him to bugger off, she neither does nor says anything. If she doesn't grow a spine, it'll ruin this series.

The mystery plotting was... ok.  I didn't see the murderer at all, but I'm not sure you could say this was written to be a fair play mystery either.  The first in the series touched on Native American mythology, and I love that the author made the sheriff, one of the romantic interests, a Seneca.  I'd have liked a bit more of that in this book.

In general - it has potential.  Make that MC someone worth admiring instead of a noodly, passive aggressive character that lets men push her around, and the author will be onto a solid cozy series that could be a lot of fun.