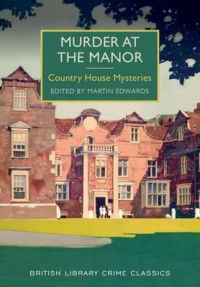 One of the British Library Crime Classic anthologies recently published, this is a collection of - as the title says - short mysteries that take place at country houses of the nominally wealthy.  I haven't read the whole of the collection, but what I have read was almost uniformly excellent.

Below the list of stories I read, along with a few quick thoughts about each:

It's Sherlock Holmes, of course it's excellent.  It's one of the more far out story premises, but it's fantastic.  If you haven't read Sherlock Holmes yet... um, why?

One of two I liked the least.  It's an inverted mystery, so really, not a mystery as far as I'm concerned.  There was no puzzle to be solved here, only what feels like an opportunity for the detective to boast.

Ok, I'm going to kind of contradict myself now, because there's no mystery here either, but it's Raffles!  I've been wanting to read a Raffles story for ages, and I've finally got my chance.  It was fun, the writing was amusing, the pace quick and lively and the ending... I saw that ending coming but it was still everything I hoped it would be.  I need more Raffles in my life.

The other one I liked the least.  Chesterton and I are not destined for the author/fan dynamic.  I did not like The Haunted Bookshop because it took me forever to figure out that it wasn't a ghost story, and that what little plot it did have was drowning in the author's exposition.  I didn't like this one either; the prose was less superfluous, but the plot was... I don't know what the plot was.  I don't know what his point was in writing this, honestly; a cautionary tale to all P.I. hopefuls?  A slag off at Holmes?  Who knows, but it's strike two against this particular Golden Age writer for me.

More 4.5 stars.  Very short story, and again, less mystery than a satire, but it was incredibly well written and humorous. There was never any doubt in my mind from the start what the ending was going to be, but that last 1/2 star was purely for the last line of the story.

Martin Edwards mentions this story in his The Story of Classic Crime in 100 Books in the chapter "Making Fun of Murder" and it's one of the stories I particularly wanted to read.  It did not disappoint.  It was hilarious; Knox doesn't try to be subtle, his humour is... well, to quote the first line of the story:

"Mr. Ponderby-Wilkins was a man so rich, so ugly, so cross, and so old, that even the stupidest reader could not expect him to survive any longer than chapter I. Vulpine in his secretiveness, he was porcine in his habits, saturnine in his appearance, and ovine in his unconsciousness of doom. He was the kind of man who might easily perish as early as paragraph 2."

I was in love from the start - and laughing.  The rest is also pure farce, but Knox manages to get a humdinger in at the very last line, and it left me laughing and shaking my head.

There's a few other stories in this collection that I want to make a point of reading in the near future; some authors that I'm only learning about whose work I want to check out.  I'll definitely be coming back to this one soon, and I'm looking forward to reading the other anthologies Edward has put together.