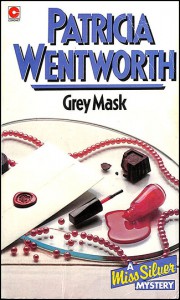 I've always been familiar with the name Patricia Wentworth as one of those Golden Age authors omnipresent on my mom's bookshelves, but I had no idea at all about the books themselves.  That gave me the chance to come at this one completely fresh, with no pre-conceived notions of what I'd be getting with Miss Silver or the mystery.

The TL;DR; version is:  it's a good mystery and very good writing.  Definitely worth your time if you enjoy going back to the golden era of mystery writing and like a good female sleuth of a certain age.

To go a bit further into things, Miss Silver was in and out of the mystery, never the focal point, but she comes across as kind, if a bit condescending, with a Holmesian level of intelligence and skill for deduction.  She's obviously not new to the investigation gig, as she has her own office and an apparently long client list by the time this book starts.

There's a big element of romance in this first book that I could have done without, especially since it is coupled with a woman-in-peril theme that I'm not at all a fan of.  Margaret got on my nerves because I find it tedious when women claim independence by refusing to avail themselves of the help they need when they need it; that's not independence, that's martyrdom.  And while I liked Charles in almost all other ways, he was an idiot about Margaret.  2/3 of the way through the book I wanted to knock both their heads together.

I liked Archie, although I doubt I'd have been as charmed by him if he'd had more page time.  But Margot... well, thank god they just don't make them as stupid as they used to anymore.  Honestly she was magnificent in her vapidity; a true danger not only to herself but to all around her.  Rather than leave me constantly irritated by her stupidity though, Wentworth left me constantly gaping in incredulity at her instead.  If she had to play this card, at least she played it brilliantly.

There are a couple of twists and hints of twists throughout the story.  I nailed one of them - the identity of #40, but I totally didn't see the twist concerning Margot coming, nor Grey Mask's identity.  And I have to say, I'm not sure I can buy it.  To hind that kind of identity in plain site for so long without ever getting caught... believing that requires a suspension of disbelief that exceeds my abilities.  Towards the end he was unable to pull it off, as evidenced by yet another twist, but that whole bit felt undeveloped, like it was either tacked on, or didn't work as well as the author hoped it would.

The ultimate fate of Grey Mask felt unsatisfactory, although amusingly karmic given his comments at the end, and I'd have liked a better explanation of Miss Silver's activities as part of the denouement, but I suppose that's a modern need to reveal the magician's tricks and I'll get over it.  I'd happily read more of the Miss Silver books, and plan to keep my eyes open for more of them in the future.