The Best of the Raconteurs 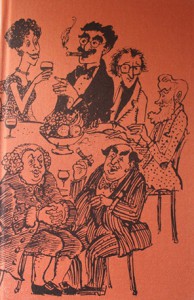 The Best of the Raconteurs is a rather large collection of anecdotes, bits from speeches and other odds and ends - some seem almost to be snippets of conversation - collected from an incredibly varied cast of wits including Nora Ephron, William Churchill, Oscar Wilde, and David Niven, to touch upon just a very few.

The quality of the entries is all over the place; as some of them aren't more than a paragraph, while others are 2 or 3 pages long, odds were always long that every entry was going to be a winner.  Nora Ephron's entry had me laughing out loud, while Ogden Nash's poem charmed me until the very end, where it promptly made my hair stand on end (which is exactly the effect Nash would have wanted).  Those that fell flat were the definition of unmemorable.

Generally, a good collection, if you like anecdotes, and very likely to have something for everyone.