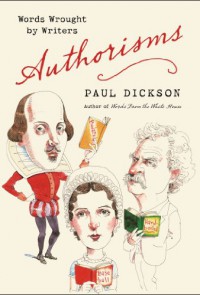 Another glossary type reference, but without the narrative hook that made  Roger, Sausage & Whippet so very engrossing.

This one is all about words coined, or first used by, authors.  Shakespeare of course, although he doesn't have the showing you'd expect.  A lot of words we take for granted today as being newish, but were actually coined over 100 years ago.  (Jane Austen was the first to use base ball in a literary work.  Google, while not more than 100 years old, has actually been found in a collection of stories published in 1942 - used as a verb, btw - and long before Sergey Brin and Larry Page were born.)

The author is a neologist himself, something that is made quite clear by his unapologetic promotion of words he's claimed credit for.  By the end remarks, it seemed to me that it was very important to him that his name live on in connection with language.  It's good to have goals, I guess.

Some of my favourite words from the collection:

Alogotransiphobia: fear of being caught on public transportation with nothing to read. (Created by George V. Higgins in 1992)

Bibliobibuli: drunk on books, as other men are drunk on whiskey or religion. (Created by H.L. Menken)

Page 99 Test: Ford Maddox Ford recommended that readers not judge a book by its first few pages, instead recommending that readers "open the book to page ninety-nine and the quality of the whole will be revealed to you."  Carried forth on the website page99test.com.