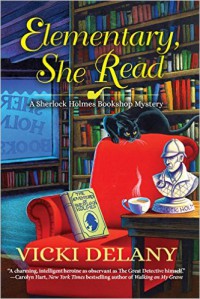 A British expat running a Sherlock Holmes bookshop on Cape Cod, finds what appears to be an incalculably valuable original of A Study in Scarlet hidden on her shop shelves.  When she attempts to return it to the woman she suspects of hiding it there, she finds a dead body instead.

I wasn't sure about this one at the beginning.  Gemma (how is that pronounced anyway?  Soft g or hard?) is obviously supposed to be a modern day, female version of Holmes with superpower levels of analytical skill and a slightly detached personality.  The thing is, Delany doesn't seem to appreciate the subtle difference between absent/single-mindedness and thoughtlessness.  Gemma is thoughtless a couple of times at the start of this book, without remorse or shame.  Holmes was cold-bloodedly objective, but he was always a gentleman.

Things get better in the second half of the book, although the use of the evil nemesis trope had my eyes rolling around in my head a bit.  The mystery plotting was really excellent, and while I suspected something wonky, I didn't see where the author was taking me until I was there.

Overall, it wasn't as strong as it could have been, but it was good.  I enjoyed it enough to look forward to coming back to it.  Not sure if I'll read the next one or not though.  Maybe.