The Book of God and Physics 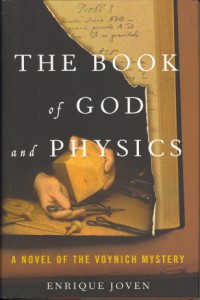 I loved every single thing about this book.  Except the writing.  Or maybe the translation.  Probably the translation.  Either way, what could have been a story to blow The DaVinci Code out of the water, was instead a worthy read for only those that are interested in the Voynich Manuscript, astronomy, and/or the intersection of faith and science.

I am incredibly fascinated with all of those things - except astronomy, of course - so I couldn't give up on the book.  For those unaware of the Voynich Manuscript, it is a real, illustrated manuscript believed to be about 500 years old.  It's full of beautiful ink and watercolour drawings that encompass chemistry/alchemy, botanicals, and astronomy, and it's written in a language that doesn't exist anywhere else.  It remains to this day undecipherable.  The manuscript currently resides at the Beinecke Library of Yale University and they have it online here.

Anything that has remained untranslatable for over 500 years becomes an unavoidable conspiracy theorist magnet, but the author of this book includes an introduction, where he makes it clear that other than the creation of the MC and his two friends, everything else in the book is historically accurate; all the other characters are real and their back-stories were kept intact without creative license.  Knowing this also kept me glued to the book when the prose would have sent me fleeing long before chapter 2.

The book is heavily centered in the Society of Jesus (the Jesuits).  (They owned the Voynich Manuscript until 1912 when Voynich secretly bought it from them.)  My gender aside, the Jesuits are my people.  I make no secret of my faith in God and my faith in science; a stance that neatly pisses off everyone in one go: atheists because I believe in God, and those calling themselves Christians because I'm a heretic for accepting the Big Bang (first hypothesised by a Belgian priest*, btw) and evolution. The Jesuits also find no contradiction between God and science and in fact, most of the major contributions to science - experimental physics, specifically - in the 17th century were made by Jesuits. They weren't slackers in the 18th century either.

So, a story about a real coded manuscript, in its historically accurate setting, involving science and theology, taking place in a Jesuit school in Castile.  And I haven't even mentioned the secret tunnels, hidden passages and coded messages, or the major supporting characters that include Tycho Brahe, Kepler, Dee, Kelly, Galileo and Cassini.

Unfortunately, as I've already said, the writing translation is the major sticking point. The narrative was choppy and there was a general abuse of pronouns, leaving the reader sometimes wondering who was being talked about at any given time.  Dialogue jumped around too so that there were a few leaps of logic I couldn't follow because I couldn't parse the writing.  The ultimate care the author takes to make sure the history and the science are explained carefully (and sometimes repetitively), inclines me to fault the translation.  The author's love and knowledge of the subject matter screams from the page, as does his concern that the reader understand as much of the hard stuff as is possible, so it doesn't make sense that the story itself was written with so little care.

If I were only rating the writing, this would be 1 star.  But the subject matter and the plot were 5 stars, so in the end I split the difference and went with 3.  Don't bother with this one if you're only looking for a thriller or adventure, but if you're fascinated by the other stuff, maybe see if your library has this one and give is a go.  It'll be work, but it'll be fascinating too.

(* Georges Lemaître was the first to formally propose his hypothesis of the primeval atom, which became known as the Big Bang Theory, first published in 1931 in Nature.  He was a Jesuit priest and professor of physics.  He was also the first to note the expansion of the universe, and the first to derive Hubble's law and made the first estimation of what is called Hubble's constant - all misattributed to Hubble, at least in name.)