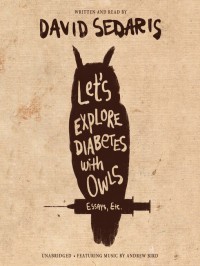 This is my first exposure to David Sedaris' writing, and I doubt it'll be my last, but this is also the first time I've ever dinged a rating for content.

The writing is incredibly good and hysterically funny.  I listened to the audio and Sedaris does his own narration - as he should, because I don't think anyone else could have pulled it off half as well.

Let's Explore Diabetes with Owls is a collection of essays, mostly biographical with embellishments for comic effect.  They were all good, but even when they were laugh out loud hysterical, they were also oftentimes gritty and confronting.  There is not a topic he doesn't address upfront and without relying on innuendo.

I don't typically have a hard time with that; but what I do rebel against is animals being hurt or killed and/or casual references made to it in my reading.  And while Sedaris doesn't hate animals, (in the first essay he professes to be an animal lover) he is very casual about animal death and cruelty.  One particular reminiscence about capturing sea turtles I just had to skip past completely.

Everything else was pretty flawless; at the end, he reads a small collection of short fictional narratives he created for use in forensics competitions (= fancy name for 'debate team').  These were very gritty, very angry, and difficult to listen to, although they were really good.  Hypocrisy was a strong theme running through these.

So while I enjoyed all his essays about traveling, life abroad, growing up, etc., I was not at all comfortable with the casual, easy way he had with telling stories involving bad ends for the animals.  There was a distinct lack of compassion or regret in these essays and their casual matter-of-factness made me uncomfortable about the author as a person.  So I dinged my rating by a star.

If you have a thicker skin than I do (admittedly, this is most people), and enjoy edgier humour, definitely give this a look if you haven't already.