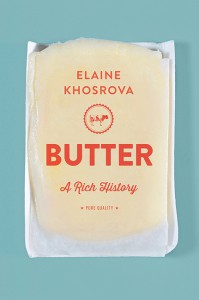 I hesitated for while over this one; I mean, how much can really be said about butter?  It seemed like a stretch.

It would have been too, if the entire 344 pages had just been about the story of butter.  But, in fact, only about half the book is dedicated the butter's rich history and present day revival.  And wow, what a rich history is was too; I had no idea that butter carving is a thing or that it is so intricately tied to so many ceremonies of worship around the world.  The prologue about Yak milking in the mountains of Bhutan caught my attention and the rest of the 10 or so chapters held it firmly, especially chapter 8, which not only discusses all the reversals in diet advice happening today, but inadvertently serves as an indictment of sorts on modern journalism.  Chapter 8 left me with a lot to think about.

The second half of the book is used to share recipes that without butter would not exist: pound cake, buttercream frosting, pie crusts, etc.  I'm definitely trying the scones and the pull apart biscuits sooner rather than later.

The best part, for me, though is at the end, when she gives step by step instructions for making your own fresh butter, cultured butter, ghee, clarified and compound butters.  I almost bought the book just for these pages and I'm not disappointed.  I can't wait to try making my own butter (as soon as I figure out the Aussie translation of "heavy" cream).  As she says, you'll almost never save any money making your own, but I think it would be fun to be able to say "I made my own butter!".

Recommended for history and food lovers - or people deeply interested in where their food comes from.