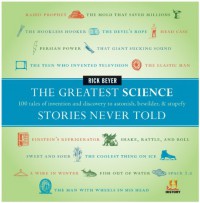 Eh, not really.  I'd heard of a few of these before, specifically the one about the creator of Wonder Woman and the lie detector.

That doesn't stop this from being a good read though.  With each story taking up no more than one 2-page spread (including photos and illustrations), this is science at its most accessible.  Most of the stories revolve around inventions and patents, which might make it more interesting to those who prefer the innovation side of science as opposed to the purely theoretical.

I found the whole thing interesting and I especially liked the vignettes included about the women who helped change the shape of things.  Most importantly, I think, is that the author didn't make a big deal about these women being women; they're there because they deserve to be, because they were amongst the smartest, cleverest, stubbornest or just best placed to have the best perspective.

Highly recommended for anyone interested even a little bit about science and technology.