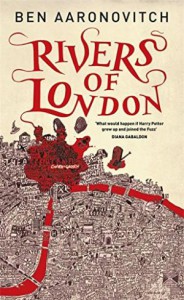 This book made the rounds awhile ago, but I got it into my head that it was darker than what I enjoy and dismissed it, until someone recently mentioned how funny it was.  Thank you whoever you are!

Not to say that I didn't have problems with it; I did - minor-ish ones including the riot of editing errors found throughout the text of my library's edition (published by Gollancz in London).  I lost count of the number of missing words, extra words and repeated words I stumbled over, until they started reminding me of the sand Peter found pouring out of his electronic devices.

Why did the face-distortion dissimulo have to happen?  By the very end, I thought I'd gotten it figured out, but I'm still guessing:

Was that a byproduct of Punch being able to come through?  When it was described after the first murder, I thought it was a disguising spell, but it became clear after the second death that that wasn't the case.

That the necessity of this was never explicitly explained bothered me; without explanation it feels possibly gratuitous.  (and makes me go all alliterative, apparently.)

Once I discovered Lesley's role, I was eager for the book to be over, but that's not the author's shortcoming, just me not liking where he was going.

But in spite of all that, I did really enjoy this book - the humour shines from beginning to end and I really liked the characters.  It was a really entertaining read and I had a lot of fun in this alternate London.  I have Moon Over Soho on the TBR already and I'm looking forward to seeing what happens next.