Sorcerer to the Crown 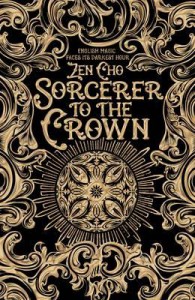 The Royal Society of Unnatural Philosophers maintains the magic within His Majesty’s lands. But lately, the once proper institute has fallen into disgrace, naming an altogether unsuitable gentleman as their Sorcerer Royal and allowing England’s stores of magic to bleed dry.

At his wit’s end, Zacharias Wythe, Sorcerer Royal of the Unnatural Philosophers meets Prunella Gentleman, a woman with immense power and an unfathomable gift, and sets him on a path which will alter the nature of sorcery in all of Britain—and the world at large…

Thanks go to Kaethe for taking the time to review this book; I'd have never found it otherwise.

The two covers for this book, while both beautiful, would lend the impression that this is a story that takes itself seriously.  The back cover blurb comparing it to Georgette Heyer comes closer to the truth though; in spite of the author's laser focus on the inequalities of race, gender and class in Great Britain during the time of the Napoleonic war, the story overall remains light and humorous.  Prunella is a classic Heyer heroine: she goes along her way, creating her own reality, rather than waiting for anyone to create it for her.

Zacharias is not, however, a typical Heyer hero.  He's a typical beta male, thrust into an alpha role with little hope of an escape that does not include his death.  He is purely ethical and naive, but also intelligent and brave.  He didn't work for me so much; I prefer my heroes to have some alpha qualities.  I didn't dislike him, and I was cheering him on all the way, but he didn't inspire any great attachment from me either.

The plot was interesting and clever although the pacing was slow for me.  It's strange to like a book but feel like it needs to be over at the same time.  Tighter pacing could have shorted the story a little bit and kept it more consistently interesting.

Overall it was a fun read all around.  I'm not sure if it's meant to be YA or not, but it would definitely appeal to a younger fan of fantasy that isn't daunted by a 350+ page read, and there's nothing here that would cause parental concern.

This book was written by Zen Cho, born and raised in Malaysia, and perfectly fits the Diverse Authors Can be Spooky Fun square in Halloween Book Bingo.