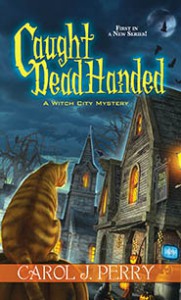 An interesting first book that shows some potential.

Lee has returned to her home-town of Salem and shows up for a scheduled interview for an on-air reporter position only to find the job was given to someone else.  Through a series of unfortunate events (including finding a dead body) she is offered instead the late-night show: a combination of live-on-air psychic call-in and host for old scary-movie screenings. Figuring she can fake the psychic bit, she accepts the job and adopts the deceased's cat.  The result is Lee being up to her eyeballs in the investigation and finding out that perhaps she doesn't have to fake the psychic bit after all.

There was a lot to like about this book:  the premise reminded me of an old show called "Creature Feature" that was essentially the same thing (minus the call-ins); it was a very popular program on our local TV station, and the MC, Dr. Paul Bearer, was quite a celebrity in the Tampa Bay area.  So the story had a nostalgic aspect for me.

I liked that Lee, a widow, wasn't mired in melancholy or introspection: she lost her husband, she misses him keenly, but she seems to live in the present, not the past.  I like the detective and the romantic potential between the two as well, although there's a definite lack of romantic tension.

Overall, it's a well-written book that, just under 400 pages, moved along surprisingly quick.  But – and at 3.5 stars you knew there had to be a "but" – the writing is not as smooth as it could be: there's a scene between Lee and her Aunt that's particularly clunky, awkward and melodramatic that could have benefitted from some tweaking. Aunt Ibby's part in this scene feels completely out of character for her, as though she was a different person when it was written.

The murder plot was ambitious and might have worked incredibly well, but the author telegraphed the plot twist –  a big plot twist – very early in the book and the result was a desire to shake Lee for being so obtuse as to not see it.  This made a rather large dent in my enjoyment of the story.  Still, the author gets bonus points because she tackles some very, very non-cozy motivations in this book.  If sexual abuse is a trigger, you might want to choose a different read.

The cat, O'Ryan, is great – the back of the cover says he "...exhibits some strange powers of his own." – which is complete rubbish; he never exhibits any powers beyond his ability to find the comfiest spot in any room.  But he's pretty cool nonetheless.

I'll read the next book gladly; there's plenty to like in this book and nothing done so badly that it won't likely be fixed in the second book.  The author left the possibilities for Lee rather wide open and I'm looking forward to seeing where she goes from here.