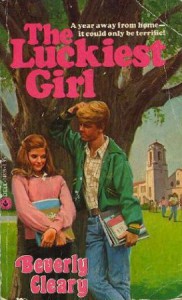 Another throw back to the 1950's but this book has a totally different voice.  It's still dated, certainly, but it doesn't feel as screamingly obvious.  Shelly comes closer to passing as a typical teen of today.

This is one of the rare books I read as adolescent that stayed with me over the years, although I'd long forgotten the title and the author.  Flashes of scenes would pop into my head at random moments here and there and I started to think I'd need to hunt down the book to re-read it.  Then I was cleaning up some book records and there is was.

Shelly is an only child with a helicopter mom and a typically 50's dad in Oregon.  In a fit of pique after an argument over a rain slicker one morning, she shoves her mother's roses down the garbage disposal.  Coincidentally, that same morning her mother received a letter from her old college roommate, inviting Shelly to come live with her and her family for the school year in California.  Desperate over the idea that her life is never going to change she begs her mom to allow her to go.

Decades later I still really like this book.  Shelly's wonder and openness about a new place, a new style of living, meeting new people - all of it was inspiring.  I feel like lately I'm surrounded by people who are only interested in judging and questioning my differences (expat) instead of enjoying (or hell, I'd just take respecting) them, so I think Shelly's attitude particularly stood out and struck a chord for me.

I also got a big kick out of reading the scenes that involved Shelly with her host family, Mavis and Tom.  Tom is especially enlightened even by today's standards.  It's Tom that rounds up the family to do the washing, then the ironing. Tom that makes his daughter practice the piano, Tom that tells his kids when it's time for bed.  He also coaches the high school basketball team and runs an orange grove.  The man has got it going on.

The Luckiest Girl isn't strong on plot, but like Fifteen the author makes her main character be honest with herself and own her mistakes and her bad choices, even if sometimes it's only internal.  If the book had no other moral lesson, there's something to be said for honest self-reflection.

This one is a keeper.