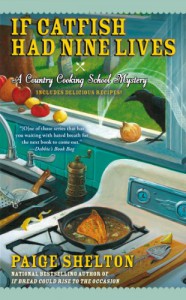 Jerome is back - yes!  But the main ghost this time is Joe, a Pony Express rider.  Gram has been working with Joe over the years to deliver the letters that never arrived and they're down to the last three.  Everyone wants to know what will happened when that last letter is delivered.

Meanwhile, during a cowboy poet convention taking place in Broken Rope, an actor is shot dead during a skit and Betts' brother Teddy is found beaten and unconscious in the woods.  (NB:  The back of the book gets it wrong again.  Teddy is never the prime suspect in anything.  Who writes these things?!?)

This was, I think, my favorite of the series so far.  I've finally figured out how the author intends to structure the series, and If Catfish Had Nine Lives captured my attention from the beginning; previous books always started off a bit slow for me.  Keeping Jerome around as something of an anchor ghost makes it easier for me to look forward to each new ghost's story; it's weird, but there it is.  Plus, since we're talking about weird - I really like the kinda/sorta romance Betts has going with Jerome.  It's a cozy - it's not like they're going to break out the ghost sex or anything! - so it's only sorta weird.  Still don't much care from Gram though.

The here-and-now mystery was convoluted as all hell.  I'm not sure I ever had any real idea of what was going on, but since it's a cowboy convention full of people from everywhere camping out in a field, the chaos sort of belongs in the plot.  I'm not sure the motivation/solution was really all that legit - the murderer's motivation felt weak and - sorry - stupid.  But the ghosts are what the story is all about anyway.  At least for me.

This is a series that has crept up on me slowly; each new one sits higher atop the TBR pile than the one that preceded it and as long as Jerome sticks around, so will I.