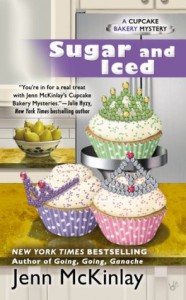 I'm going to start by saying that I think Jenn McKinlay is one of the most talented cozy authors currently writing.  Writing as Jenn McKinlay she has yet to produce a cozy series that doesn't start out strong from the first book, with likeable characters, excellent settings and well-plotted murders.  I've often used her writing as the standard by which I've judged other cozy authors' offerings.

Having said all of that, Sugar and Iced is not one of her works I'll ever use as an example of said excellent writing.   And while I strive personally to write my reviews to the best of my ability, trying to be as expressive as I can, stretching my use of language, this review will not be my best example either.  The word "stupid" is going to be used.  A lot.  Because sometimes "stupid" is the only choice.  Also, incorrect sentence structure will be used.

Our MC's, Mel and Angie (mostly Mel) own and run a Cupcake Bakery in Scottsdale, AZ.  Summarising the blurb:  ...the world of pageants is even hotter than Mel’s kitchen. A high-strung judge and a pushy stage mom target Lupe, a young friend of Mel and Angie’s, at the competition and aim to take her out... When the same judge shows up dead underneath Mel and Angie’s cupcake display, Lupe is crowned the lead suspect.

Now, this is purely a personal thing, but I hate beauty pageants.  You guessed it, I think they are stupid.  Inane.  Silly.  All that parading around on stage, preening, with that constant undercurrent of "pick me! pick me!"  Blech!  Just...no.  And that argument so many people (the author included) use?  The one that goes something like this: "But it's not really a beauty pageant - it's for scholarship money!"  Specious.  Does anyone really, really think a woman's worthiness of higher education funding rests on how she looks in an evening gown and bathing suit?  I'm not even going to touch the tiara...

I fully realise, accept, and respect that there are girls and women out there who love pageants, enjoy watching them and participating in them.  If they enjoy them, they should embrace them.  I'm just not one of them, so reading about a mystery set in the midst of a teen beauty pageant isn't going to hold my interest very well.  Having Mel put up a token resistance at the beginning of the story, but changing her mind once she was made to strut around on stage with the (stupid) tiara on her head doesn't engender my respect for the constancy of her beliefs either.

That leads me to Mel's angst.  About being overweight during her formative years.  About the death of her father and whether or not she's a disappointment to her mother.  About the future of her love life.  There's a LOT of angst.  Rather than Mel evolving over the length of the series, apparently Ms. McKinlay intends for her to have a rapid growth spurt over the course of just one book.  Dump it all out and deal with it all at once.  Sometimes that works, but here it just felt melodramatic and a tiny bit insincere.

Speaking of insincerity - the love triangle threatens to become a square.  (My personal opinion based on nothing but my own imagination is that this is Ms. McKinlay's way of digging her heels in and rebelling against the love triangle backlash.  *Shrug*  Her characters, her choice.)  Each of the three men know about the other and whenever they meet a witty banter springs up amongst the men that is completely, 100% unrealistic, fantastical and almost stupid.  It's also pretty amusing, so I found it didn't bother me as much as it entertained me.

The plot was really well done.  Completely nasty victim, leaving lots of suspects behind in a busy setting where anyone could have done anything and gotten away with it.  The writing didn't give away the murderer, so I was along for the ride when the murderer was finally revealed.

In summary, if you don't find a beauty pageant setting asinine, this is a good read.  Minus my total and complete dislike of the setting, this would have been a 3.5 star read.  Another .5 star was lost to the ending.

The ending of this book is apparently a prelude to the story line of the next.  The ending, in one word, was stupid.  The storyline she's setting up might have been novel in early 70's soap operas but now?  I'm not going to say I'm disappointed, because I'm going to withhold judgement until I've read the book, and I am going to read it.  This book and the author's insistence on yanking around the MC's love life aside, it's an excellent series.  But I am sceptical.  Highly sceptical.