The Cakes of Wrath (Piece of Cake Mystery, #4) 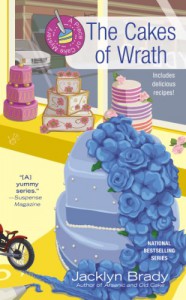 I'm beginning to think my vow of removing average or below average cozies from my shelves is going to leave me with nothing left to read.

I could write a long review about why I think The Cakes of Wrath fell short, with specific examples, and quotes, but suffice it to say that I found it disappointing.

Rita isn't the most likeable MC I've ever read, but she's a far, far distance from being the most unlikeable.  But her supposed best friend, Ox, takes whatever chance he can get to point out to her how he could be doing a better job of running her cake shop than she is.  Her mother-in-law/business partner (Rita is widowed) is such a meddling, manipulative...I-don't-know-what; she alone makes me want to hurl the book across the room.  If the Southern iron-fist-in-velvet-glove represents the line, then Rita's mother-in-law is about a dozen steps over it.

Then there's the "love triangle" - Rita is openly playing the field between bar owner Gabriel and police investigator Sullivan (who isn't even IN this book - he's on a fishing trip.  I'd have liked to have gone with him.)  In case love triangles weren't annoying enough, this one moves slower than a glacier in January.  It might as well be non-existent.

Then there's Rita's behaviour throughout the plot - steamrolling her way through the neighbourhood, interrogating "suspects" and claiming to all and sundry that she knows who the killer is.  She tells people - everyone! - exactly who she thinks the killer is.  Not just her friends - everyone!  It teeters on slander.   Of course she's wrong, and of course the killer is pretty obvious (well, to me anyway).  The investigator in charge of the case runs around after her making completely absurd accusations with absolutely no factual basis; if I were a police officer reading this book I'd be crazy offended.

Rita's cousin goes storming off to have it out with her boyfriends obsessive stalker, but Rita finds her not 10 minutes later calmly sitting down with said stalker having tea!

Guess this review wasn't as short as I intended it to be when I started, but yeah - disappointing read.  Maybe I'm getting too picky, but I prefer my mysteries and their characters to be more subtly written, I guess.